In the United Kingdom today, obesity is becoming a very common problem. Not only does it affect a quarter of adults but it is now believed that as many as 20% of children in the final year of primary school are obese or overweight.

What Is Childhood Obesity?

The word “obese” is used to refer to anyone with excess body fat and who is extremely overweight. If current obesity trends in the UK continue, 50% of the country’s population could be medically obese by 2030. One of the most worrying government statistics shows that people are becoming overweight or obese at an earlier age. Around 1/3 of children between the ages of 2 and 15 are now considered either obese or overweight and this makes sobering reading. A UN study from 2018 has revealed that the United Kingdom is now Europe’s third fattest country, with only Turkey and Malta ahead in the obesity stakes.

There are several ways in which obesity can be calculated, however the most popular method and the one which is most commonly used is the BMI calculation. BMI or Body Mass Index measures whether or not your weight is healthy in relation to your height. The BMI of any individual can be calculated by using their gender, age, weight, height and level of activity. For the majority of adults, having a BMI of 18.5 – 24.9 is considered to be healthy. Those with a BMI of between 24 and 29.9 are said to be overweight, while a BMI of between 30 and 39.9 is considered obese. For those with a BMI of 40 or higher, this is classed as being morbidly obese.

With more children having too high a BMI than ever before, it is vital to take steps to implement changes before the crisis gets out of hand. Obese children not only tend to become obese adults, but they also put a greater strain on the NHS’ resources. This continues throughout children and into adulthood, and at a time when the NHS is struggling to cope with rising treatment costs, this is unwelcome news.

It is no wonder that the government has now started to think about putting action plans in place to reduce the number of obese children in UK society. 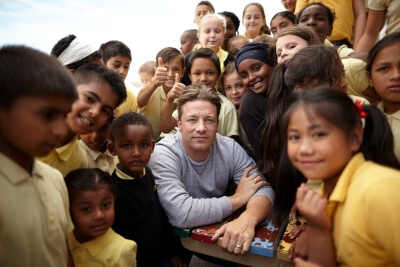 However, the crisis has been acknowledged for some time. As long ago as 2005, TV chef and celebrity Jamie Oliver launched his school dinners campaign, trying to reduce the unhealthy meal options offered to children in Britain’s schools and instead to introduce nutritious, low calorie foods. It was his aim to challenge the all-too-familiar junk-food culture which has been thriving for generations, and through his TV series called Jamie’s School Dinners he showed schools that it was possible to serve cost-efficient, healthy dinners which children still liked to eat.

Thanks to Oliver’s TV programme, over 270,000 people signed a petition online and this was delivered to the Prime Minister in Downing Street in March 2005. Although the government’s response was a positive one – an addition of a further £280 billion to the budget for healthy school meals – changes have been slow to be fully implemented in Britain’s schools. Currently deep fried foods can still be served on two days of the week, although soft drinks can no longer be bought or given as part of a meal in school.

Sadly, if you step into many schools in the UK today, you will still find a raft of unhealthy meal options available alongside healthy choices like pasta salads or baked potatoes. All too often, secondary-aged pupils can still buy cakes or cookies, or, even worse, they can leave the premises at lunch time to buy fast food from local takeaways.

There has been one recent step which could indicate that more changes are on the horizon, however. The government’s 2016 budget introduced the sugar tax, clamping down on sugary soft drinks. This tax was brought into effect in 2018, with manufacturers of soft drinks being taxed varying amounts depending on volume of sugary beverages are produced or imported. The revenue raised from this tax will then be spent on sports funding in primary schools nationwide. It is hoped that these measures will not only reduce the amount of sugar young people consume, but also increase the amount of exercise that young people take, hopefully creating good habits which will last a lifetime.

At the end of the day, the answer to combating childhood obesity lies in educating parents, and now that all UK children are weighed in their final year of primary school and parents are informed of the results, it will hopefully be a wake-up call to Mums and Dads that they need to put changes in place to protect the health and well-being of their family.